Signals Dialogue /// The pandemic and the music industry 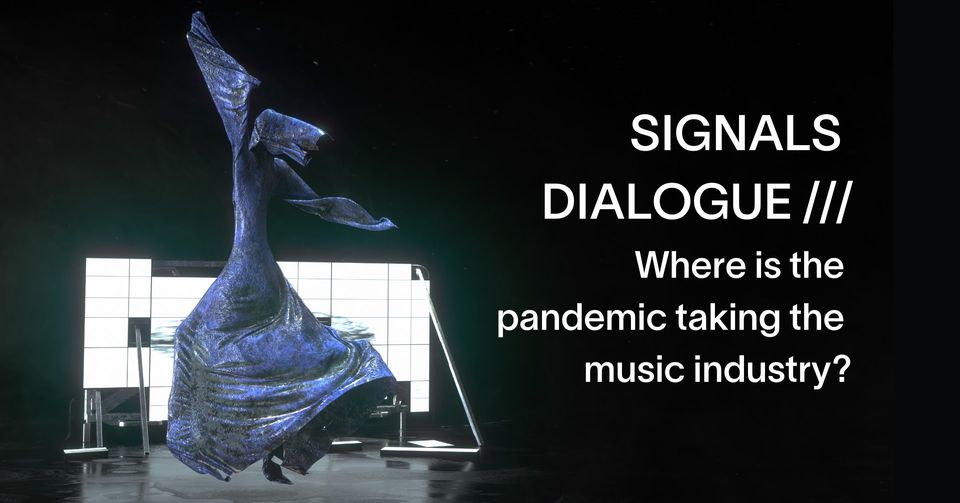 /// Dialogues at Signals Festival 2020 will be live streamed with a limited onsite audience.
Where is the pandemic taking the music industry? With Melissa Taylor, Mareena, Kristoffer Cornils. Moderated by Andrea Goetzke (Music Pool Berlin)

/// About
If the lockdown was a catalyst exposing the flaws of an industry reliant on live events to support itself, what does the resulting change look like? From understanding social vs economic sustainability through to deconstructing the current structures both limiting or supporting different aspects of the industry. What are some real solutions to (re)build a sustainable, supportive and independent music industry?

/// Join
Limited tickets for onsite attendance are now available on our website >> signals-festival.com
Or tune in to Signals Festival to watch our panels, performances and films online!
Live streaming powered by Etikett Radio.

/// Panelists
Melissa Taylor
Founder and Managing Director of Tailored Communication. She has worked in electronic music for 20 years with many respected companies - including 5 years as in-house press at Fabric London - and as a freelance music journalist. In 2006 she relocated to Berlin to found Tailored Communication, for clients that initially included Ostgut Ton, Playhouse and Gudrun Gut's Monika Enterprise. Tailored has grown over 15 years entirely through word of mouth and client recommendations into one of the world leading independent music agencies, working with a range of highly respected artists, events and labels. Melissa is currently working on a collective patronage hub for the independent music industry called ERIS, and is an advocate for the cooperative streaming service Resonate.
tailored-communication.com
www.eris.tube
www.resonate.coop

Mareena
DJ, producer and label founder. Mareena developed her musical career in synchronicity with the steady advancement of techno and house after growing up in the GDR where techno emerged in the '90s. This evolution led naturally to DJ gigs in many notable venues and organisations such as Berghain, About Blank, Griessmühle, De School, Tangent Gallery in Detroit during Movement Festival, Gegen Berlin, The Bunker New York, Monasterio Moscow, IfZ and most prominently her residency at Tresor since 2012.
As one of the curators of the New Faces nights as well as the founder of the UNRUSH podcast, event series and record label, Mareena has continuously crafted new conduits for both established and emerging artists to break down musical barriers and transform the world around them. As a DJ she is a chameleon, carefully stitching together immaculate and immersive sounds that will quickly turn any discerning dance floor into a sweaty rave.
instagram.com/mareena_bln/
soundcloud.com/mareenaofficial

Kristoffer Cornils
Freelance cultural journalist, writer, and translator with a focus on music. He has been an editor at GROOVE and after that Spex before the latter's staff was let go due to the economic impact of the COVID-19 pandemic on the magazine's publisher and continues to write for GROOVE, DJ Lab, HHV.de Mag as well as a few other German-language publications like ZEIT Online.
facebook.com/kristoffer.cornils/
twitter.com/scatteringsense
www.torial.com/kristoffer.cornils2

Andrea Goetzke (moderator)
Curator and cultural producer in Berlin. Currently she is organising a programme on Collective Practices as they relate to artistic creation, cultural organizing and social coexistence, at the independent arts space ACUD. Andrea is co-founder of Music Pool Berlin, a professional development programme that pools experience, knowledge and networks for musicians in Berlin. She has been working in music programming and discourses for the past 10 years. She runs a music festival (Torstraßenfestival), is hosting a radio show (Byte.fm), has worked on different projects with Haus der Kulturen der Welt, with Ableton Loop, and with the Goethe Institute, as well as all2gethernow e.V. Andrea has a background in digital culture, work with the UN, and environmental studies.

In collaboration with Signals Festival.