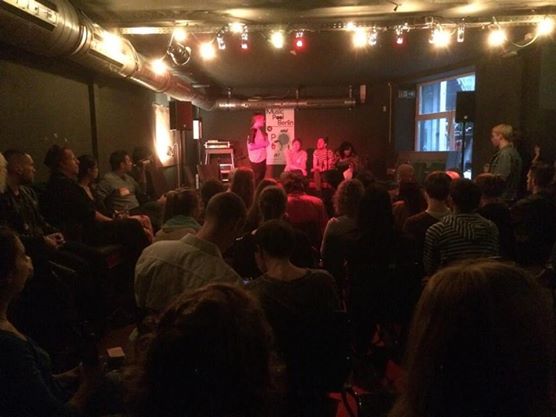 The topic of DIY concert and party organization/promotion in Berlin attracted lots of interest – around 70 people, mostly organizers/promoters themselves as well as artists (identified through a show of hands) came out to ACUD in Berlin Mitte on a rainy Tuesday night to join the discussion.

Different concert/party organizers/promoters doing great cultural work in our city shared their experiences on a panel. People who organize and promote shows in rented venues on the panel were: Michael Aniser - noisekölln, Joey Hansom - Expatriarch, Melissa Perales - m.soundtrack, Torstraßen Festival, Sebastian Hoffmann - Fourtrack on Stage. People who book shows for a venue were: Gianluca Baccanico of Loophole and Andre Jegodka of Antje Oeklesund. A few more people joined the panel later – Brandon Rosenbluth - UnReal, and Daniel who presented a space he runs in Wilmersdorf – Loft 46. People of Neuwestberlin joined the discussion from the audience. There were several more people who contributed to the discussion, but who didn't identify themselves as concert organizers and promoters.

The evening was introduced by Johannes Braun of ACUD, which itself is a newly re-opened space in Berlin Mitte, and a potential new venue for smaller DIY shows - with two rooms of a capacity of about 100 people, plus a gallery and cinema. ACUD has been an artist space for a long time. The building was up for sale recently, and got bought by Johannes and two colleagues who now aim to maintain the building as a cultural space.

The share of the small pie of money was one thread of the discussion. There is little money available to be distributed for the many people that are involved in putting on a small concert. The artists, the booking agency (in some cases), the local promoter, the sound technician, the door person, security staff, flyer/poster designers, and the venue itself – they all need to get a little bit out of the small available pot. On top of that, the artists need to eat and drink on the day, and Gema also has to be paid. The difficulties to give guarantees to artists were discussed – with an artist perspective conveying the feeling that sometimes, the local promoter is not motivated enough to promote a show if there is no guarantee – and with a promoter perspective that for experimental shows the risk is just too high to lose money on a show.

And what can you expect for your guests to pay at the door? With lots of music lovers in Berlin having also little money left in their monthly budget to spend on shows, the entrance fee should not be too high. On the other hand, when some guests are not even ready to pay 5 EUR at the door for a concert, or complain that the beer at the bar is more expensive than at the Späti, that's annoying. Sebastian pointed to a current article in Jungle World on the topic.

The discussion participants organize their shows in different venues around the city, of which there are plenty. However when it comes to the combination of a good quality sound system, affordability of rent, low stress level with the neighbourhood, and nice people running the place – it becomes more difficult to find the best venue for your show – a perspective shared by Joey. Etkin Cekin, who works on the music programme at ACUD, commented that for him, having moved to Berlin from Turkey some years ago, it was great to see so many culturally motivated music events, and not only the commercial ones dominating the scene, as he was used to.

There was a heated discussion thread on the topic of cooperation with sponsors. The Neuwestberlin crew recommended working with drink sponsors, in order to make more money on a night. They pointed out that there are many drink producers now out there who come from the same cultural mindset and background, and the many small new drink manufacturers were just as DIY as the artists and promoters are. Many of the promoters disagreed to this and didn't find this strategy culturally suitable for their shows.

The bottom line of the discussion was that all discussion participants are organizing and promoting shows out of a cultural and artistic motivation, for their love of music, and definitely not for the money. It became clear that it is not possible to do it for the money anyway. DIY concert and party promotion in Berlin is a cultural activity and expression, and people do it because they love to do it. This statement got the most clap of hands of the night. Sebastian made some suggestions at the end of the discussion, like a Berlin-specific award (Spielstättenpreis) for music venues and promoters, that would make it a bit less financially stressful to experiment and to make music culture.