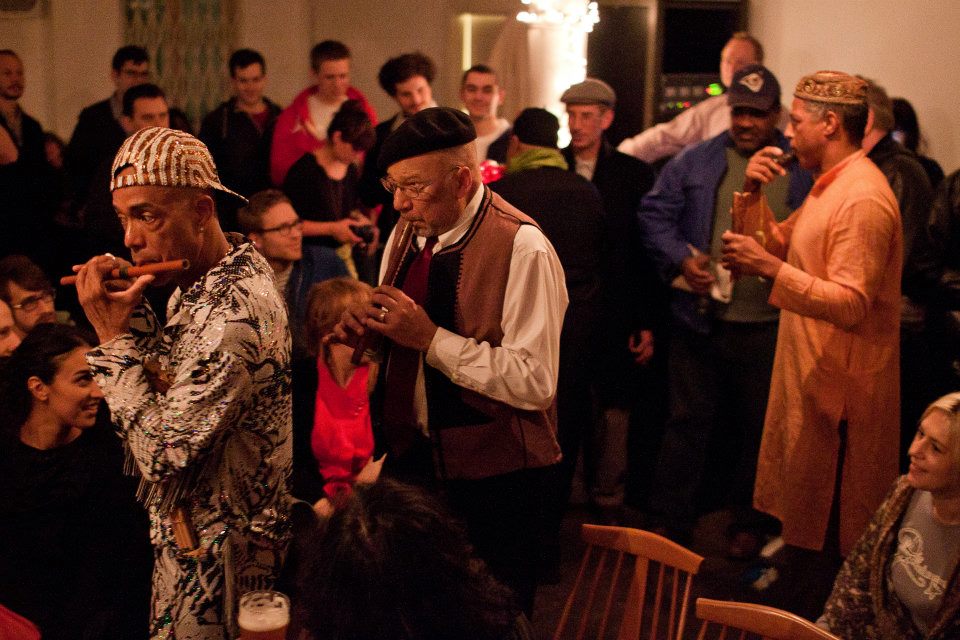 The artist talk gives you the chance to talk to some of the last true masters from the heydays of "cosmic" jazz. Led by the restless Idris Ackamoor a bunch of pupils of free jazz legend Cecil Taylor at Ohio's Antioch College used a student grant to escape the US to travel to europe and then all over Africa as early as 1972, playing and recording with local musicians wherever possible. Back in the US, The Pyramids incorporated their African experience into a music which is as unique as visionary, releasing three albums in private press before disbanding in 1977. Almost thirty years later the musicians regrouped, encouraged by the fact that new audiences and a new generation of especially electronic music producers had enthusiastically embraced their "old" music - The Pyramids have been cited as a major influence and sampled by luminaries like Flying Lotus, Caribou, Gilles Peterson and Bonobo.

The public interview gives in insight into the 40 year long music careers of the band, as well as the band's approaches to music in its traditional sense - to create ceremony and as a vehicle to pass on knowledge and history of the tribe/community. The Pyramids take inspiration from a time when there was no distinction between the performers and the audience, all being part in creating music. Transforming this tradition into the 21st century, the Pyramids encourage new creative ways of engaging the public and blurring the lines between professional and non-professional musicians.

The Music Pool Community evening takes place at the end of the day of a 1,5 day practical workshop to explore new spaces for performances and make music with the Pyramids. The full workshop is made possible through a collaboration between NK ,planet rock , Torstraßen Festival  and BIMM.

If you would like to attend the entire workshop and make music with the Pyramids, please find all info here:http://www.torstrassenfestival.de/workshop-with-idris-ackamoor-the-pyramids/.