Community Care and Staying Connected during the Pandemic 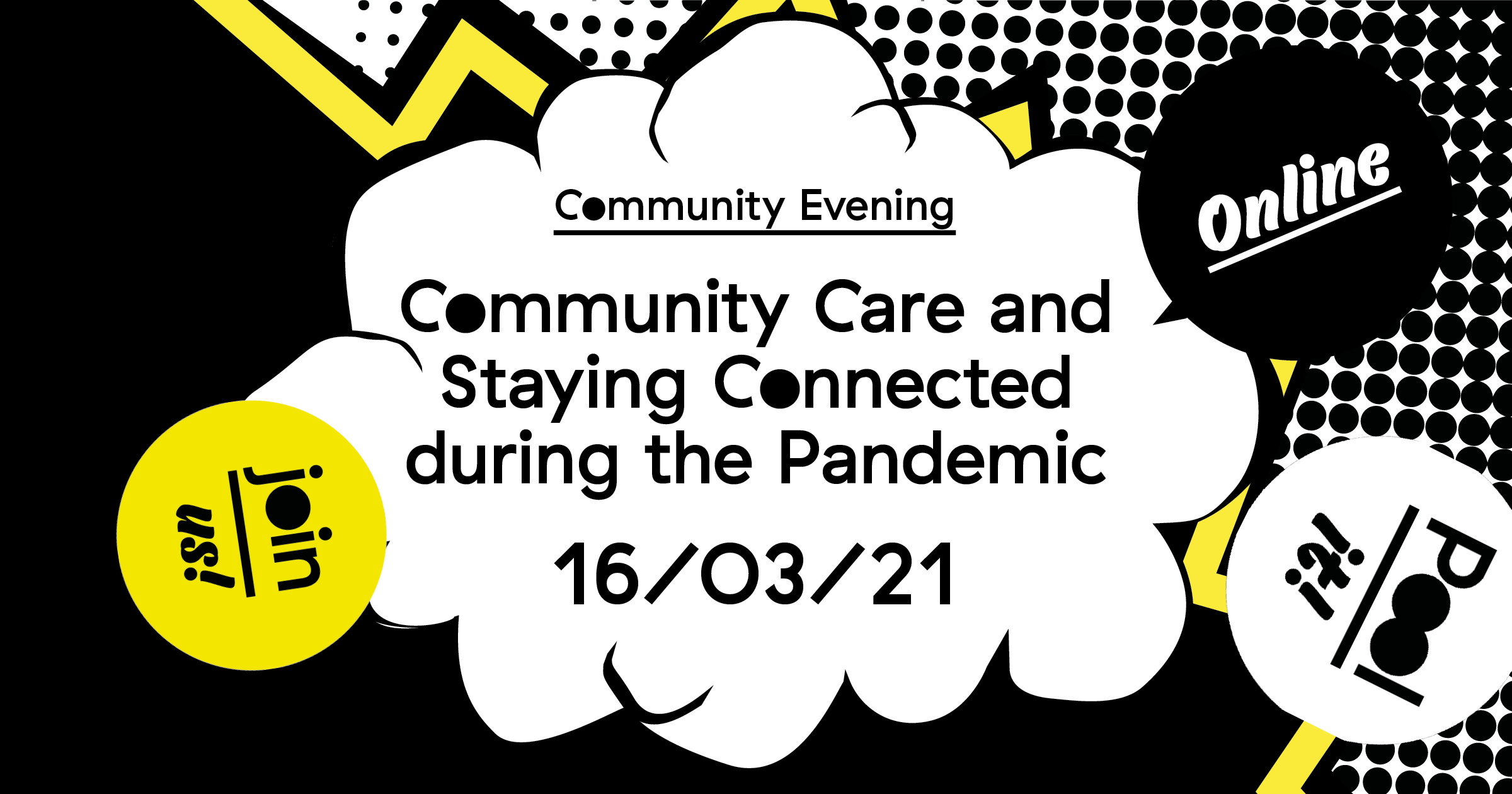 How have you stayed connected with other musicians, with your community or collective, and a wider scene during the past year of lockdown? What can we learn from this for the coming months and beyond?
In this Music Pool evening, we are curious to learn about experiences of different musicians networks and communities during the past year. What has caring for your collective, community and scene looked like? How have you continued collaborations? In a field like music that used to thrive a lot in physical spaces of concerts and club nights – how have you continued your practices, care and networking outside of those spaces?
This conversation is meant to give inspirations and share lessons learnt on networking, collaborations and community care for musicians for the coming months and beyond. It is also meant to give some pointers to musicians on where they can turn to if they are currently looking for connections and collaborations.

During the conversation, there will be also space for you all to spontaneously share your experiences, and ask questions.

No registration required. Just join us in the meeting room.

Aiko Okamoto understands herself as a medium, connecting people between streets, club culture and visual art. In her weekly radio show "Notiz für die Welt danach" on Sphere Radio, she reads texts on anti-racism, housing and art. As an active member of the protest opera Lauratibor, she sings loudly at demonstrations against the sellout of the city. She also organizes events in IRL and digital spaces for the international network female:pressure.

Texas-born Sarj Lynch (they/them) is a Berlin-based community organiser and facilitator focused on mutual aid, compassionate communications and music. They are the co-founder and director of aequa, a community for social equity. Studies in journalism and internet law led to a career spanning technology, education, human resources, gastronomy, coaching and event management, with many odd jobs in-between. In music, they have played the roles of radio host, DJ, promoter, publicity director, critic and nerd. At aequa, their day to day is focused on running the aequa Community Centre in Berlin Wedding, and facilitating and co-organising community workshops, working groups and exchanges with a focus on mutual support, collective empowerment and collaborative action.

dumama is the South African singer and cultural nomad Gugulethu Duma, who grew up in a family of welders, singers, nurses and healers, between Pretoria and the Eastern and Western Cape. Her self-described “magical realism prayer music” pulls inspiration from Xhosa folk, jazz, hip-hop, and moments of protest in Africa and beyond. The multi-instrumentalist kechou (same) was born Kerim Melik Becker to German and Algerian parentage in a household governed by sonic progressivism (father) and feminist teachings (mother), and has spent the last half-decade producing Afro-fusion musical experiments in Germany, Uganda, Zimbabwe and South Africa. If anyone is well-equipped and -matched to tackle the global malaise of history and disease through storytelling in sound, it’s this pair. dumama + kechou recorded buffering juju long before the pandemic hit, at its core is a trial-and-error lesson for our present circumstance: when the world is recognizably fucked-up, what does it mean to build a new one? Together they co-founded a collective, called out of time embassy - curating a weekly jam session called Sonic Interventions in Berlin.

Mirca Lotz (Network the Networks, Music Women* Germany)
Mirca is a curator, event organizer and activist in Munich and Berlin. With her creative agency [fwd: like waves] she produces and curates unique events with a focus on shows in public spaces, working intersectionality and crossing creative boundaries between music, movies, art, politics and more. She is an innovator in the international Keychange project, the co-founder of musicBYwomen* a Bavarian network based on learning, sharing, connecting and exchange for women* in the music industry and connected creative fields. She is member of the board of the Music Women* Germany network which just launched a nationwide database for women* in music and is invited regularly to speak about gender equality in the music industry at international festivals and conferences. Mirca also develops safer spaces policies for events and gives workshops and talks about it with her agency “Safe The Dance”. Currently, she is organizing a network meetup and exchange event called “Network the Networks” coming April 21st at ℅ pop convention.