Mi, 01.07. Film x Music – On Collaborations between Filmmakers and Musicians 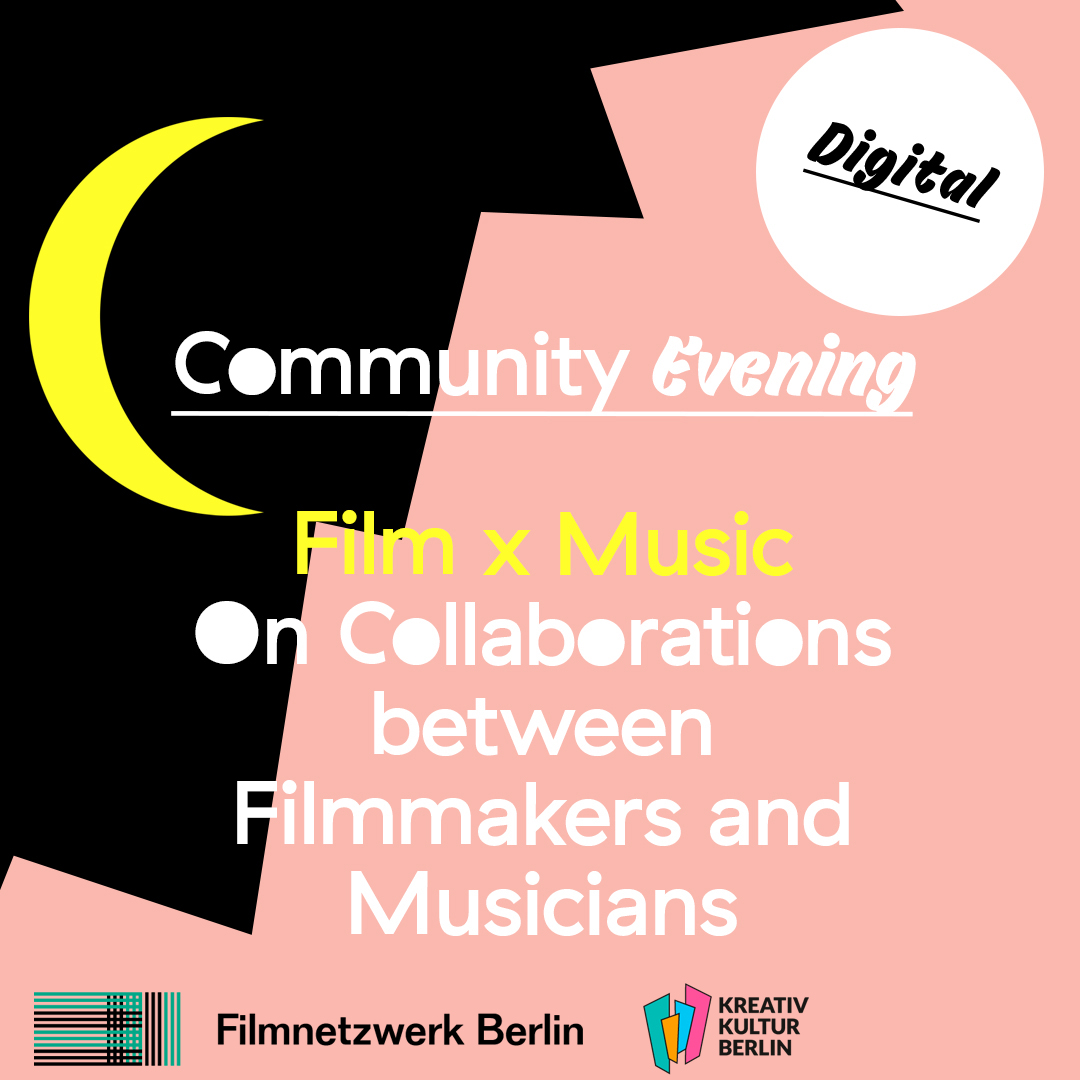 We are inviting both filmmakers and musicians to this community evening for a joint conversation and exchange of experiences. Music is part of so many films, however sometimes it comes in as an afterthought and very late in the process, or has little budget dedicated to it. Filmmakers and musicians often struggle to find a joint vocabulary to talk about both their perspectives and artistic ideas. And then, there are also organizational processes, like licensing and securing copyrights, that both sides have questions about. How can filmmakers and musicians better work together? How to better understand each other’s processes, approaches and requirements?

Panel discussion: With two teams of filmmakers and musicians who have collaborated on recent projects, we would like to explore their collaborative processes from both a creative and organizational angle. How can filmmakers and musicians come up with a joint vocabulary to talk about music in a film? How to develop ideas for sound for a film? What challenges and best practices have come up during the collaborative processes? What are legal questions to keep in mind?

After the panel discussion, we will leave and organize spaces for those of you interested to get to know each other better or exchange perspectives about a topic in more depth. The small break out small group conversations will be optional, for those who are interested to talk more.

We will also offer a notice board for you to post, for example, if you are looking for music for your film, or if you'd like to show your music to filmmakers. So we hope that also in the digital space, some connections can be made.

Participation in the meeting is free. Please register with your email address here: https://bit.ly/3hbLKRJ or send a mail to andrea [at] musicpoolberlin.net and we will send you the link to the meeting. You can register at any time, also shortly before the meeting.

As a former projectionist, Antonia Hungerland, born in Wuppertal, in 1985, knows cinema from the inside. In India, in 2008, she shot her first feature documentary followed by several short films. In addition she assisted in various film and television productions. At the Film University Babelsberg KONRAD WOLF she studied directing and passed her diploma with distinction. „(M)OTHER“ is her graduation film.

Austrian composer Markus Zierhofer has been creating music and sound worlds for over a decade for independent film productions as well as international collaborations for Netflix, Disney, Universal or abc. After his Bachelor in composition and Master degree in film music at the Film University Babelsberg Konrad Wolf he is working on various formats in his studio in Berlin, blending and bending musical genres of all kinds to find the extraordinary tone for each project.

Leonie Krippendorff - Born in Berlin, Germany in 1985, she studied directing at the Film University Babelsberg Konrad Wolf from 2009 to 2016. Her graduation film, Looping, was nominated for numerous national and international prizes and won several. Her debut feature film, Kokon, premiered as the opening film of Berlinale Generation 14plus in 2020. She is currently working on the screenplays for two new feature film projects. Variety chose her as one of "10 Europeans to Watch 2020".

Maya Postepski is a Canadian musician and producer from Toronto, currently based in Berlin. She has been making music for over fifteen years, best known as drummer of the electronic group Austra (Domino). She is a multi-instrumentalist, prolific remix artist and DJ. Maya co-wrote and produced music for TR/ST, worked as a vocalist with Egyptrixx, and currently plays live with Emel Mathlouthi and Peaches. She performs solo under the title Princess Century, and will release her third solo album in late 2020. She is also actively involved in consulting for dance, fashion shows, commercial work and film scores. Maya was invited to participate in the 2018 session of the Berlinale Talents program as a film composer, and scored Leonie Krippendorffʼs latest feature film, Kokon, which premiered at Berlinale 2020. She also scored Stephen Dunnʼs Closet Monster which won Best Canadian feature at the Toronto International Film Festival.

Sabine Steyer-Violet is a screenwriter (Other Parents, TNT Series) and creative producer (Unorthodox, created by Anna Winger, Netflix Series) and works sometimes as a music supervisor (Bad Banks, ZDF/Arte) too. She studied visual communication with Wim Wenders and Gerd Roscher at the Hochschule für bildende Künste Hamburg. She completed a feature length documentary, various documentary contributions for Arte, 3sat and ZDF kultur and has worked as production manager and creative producer for international feature films, music videos and TV series together with Tilda Swinton, Christoph Schlingensief, Monika Treut and many others. She has also founded the music consulting company Supertape together with Melissa Perales and supervised projects by Christian Schwochow, Samira Radsi and Edgar Berger. Sabine lives in Berlin and currently develops and writes several scripts for TV and cinema.